Okay I can’t believe I just wrote that, but anyway, I couldn’t really think of a way to start this post. Well, this post is about my visit to a Chinese temple in Mumbai. I went there in the month of January.

I learnt about the temple through my friends on Instagram. Of all the years I have spent in Mumbai, I had no idea that a handful of Chinese called Mumbai their home. The locality is situated off Nawab Tank Road near Mazagaon Dockyard. The street is a stones throw from Dockyard road railway station on the Harbour line of the Central Railways.

The quintessential Chinatown is a quiet place, almost like a sleepy urban village. Concrete buildings which are not more than two storey high dot the bylanes. The locality has a shrine, bathed in red color. The shrine isn’t like the ones we have in the rest of the city. Instead, it occupies an entire floor inside a two storey building. There is a cemetery too, although I did not get an opportunity to visit it. 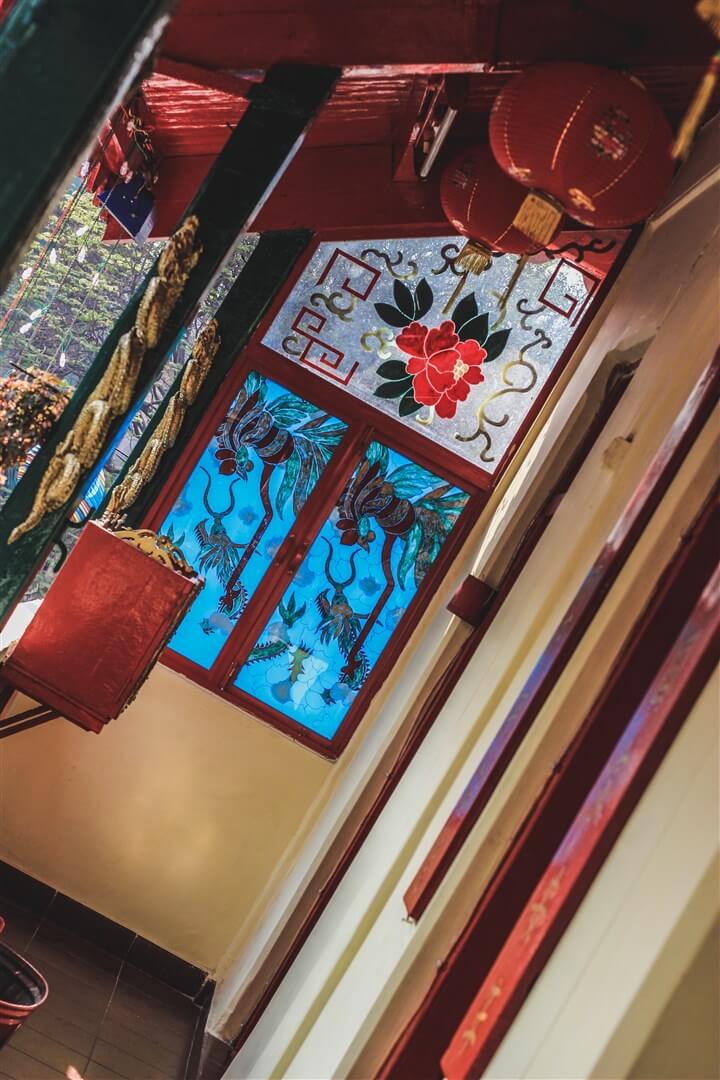 The small balcony with the main door to the shrine at the right. The building was decorated with lanterns of all sizes. I loved the glass paintings too.

The Chinese light their incense sticks over here. 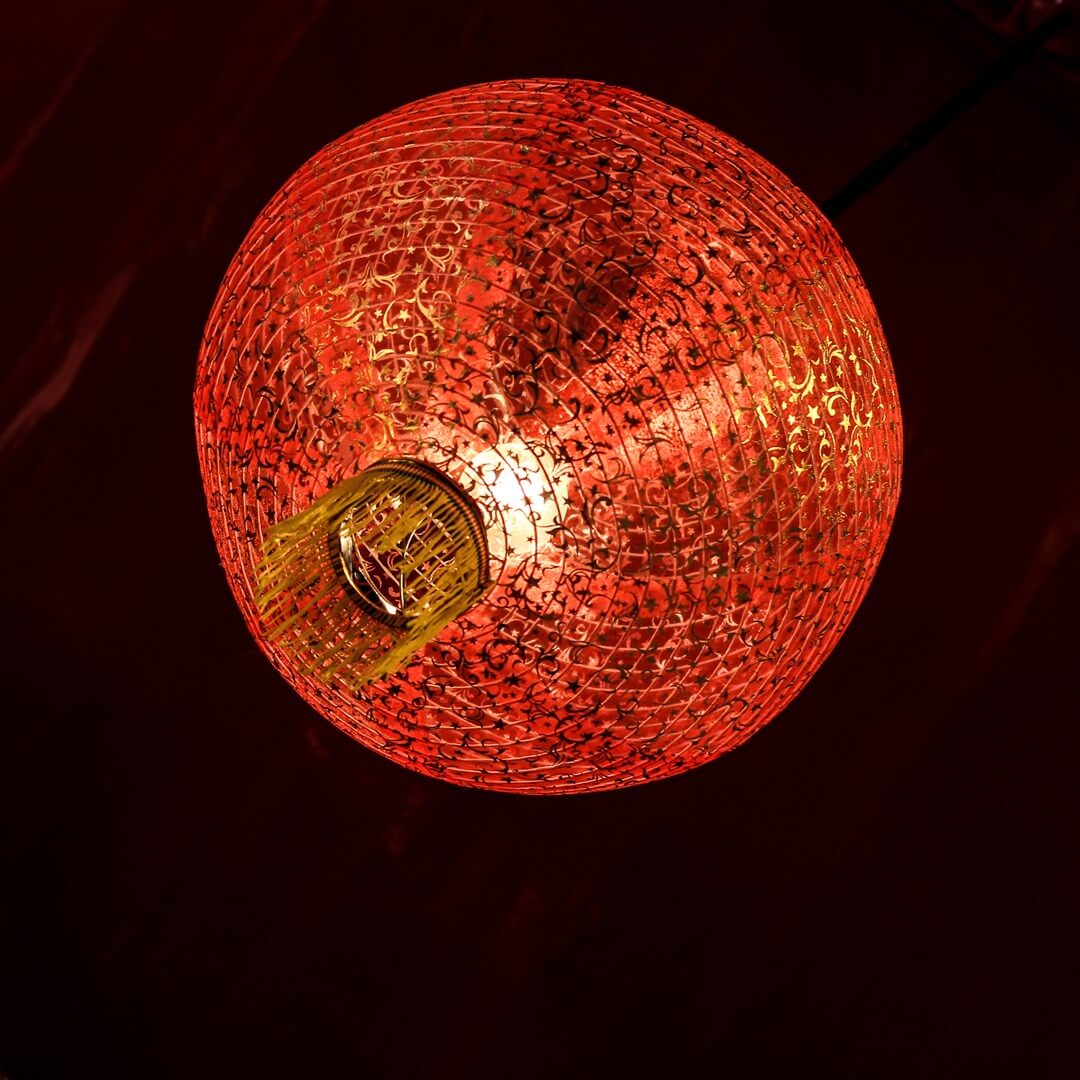 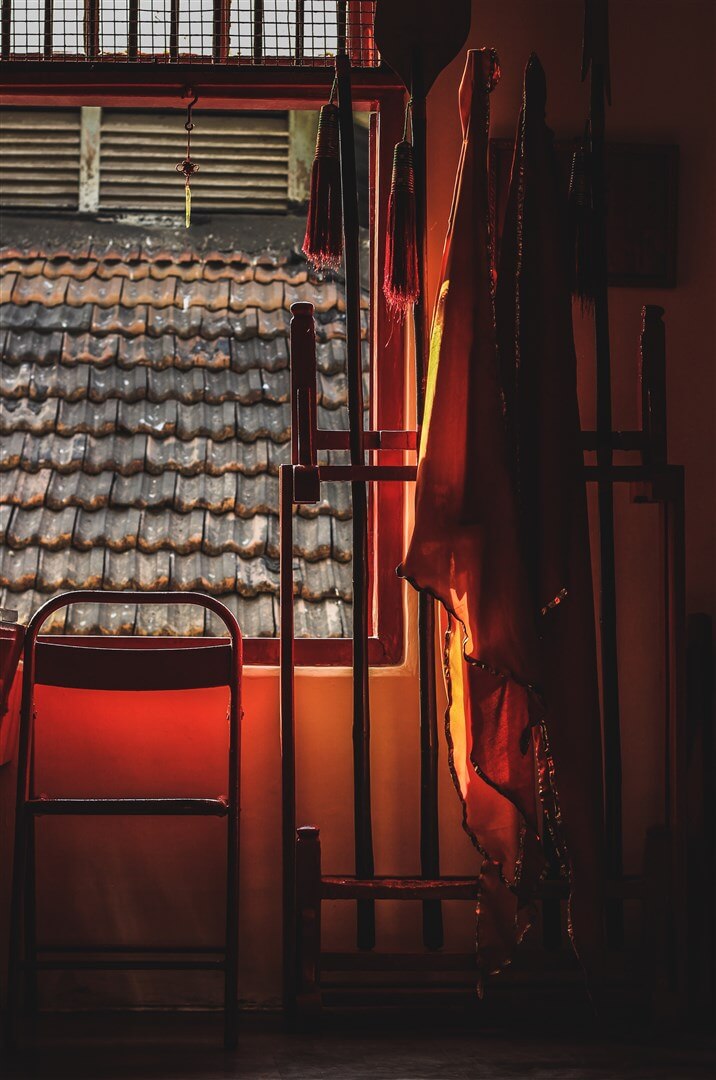 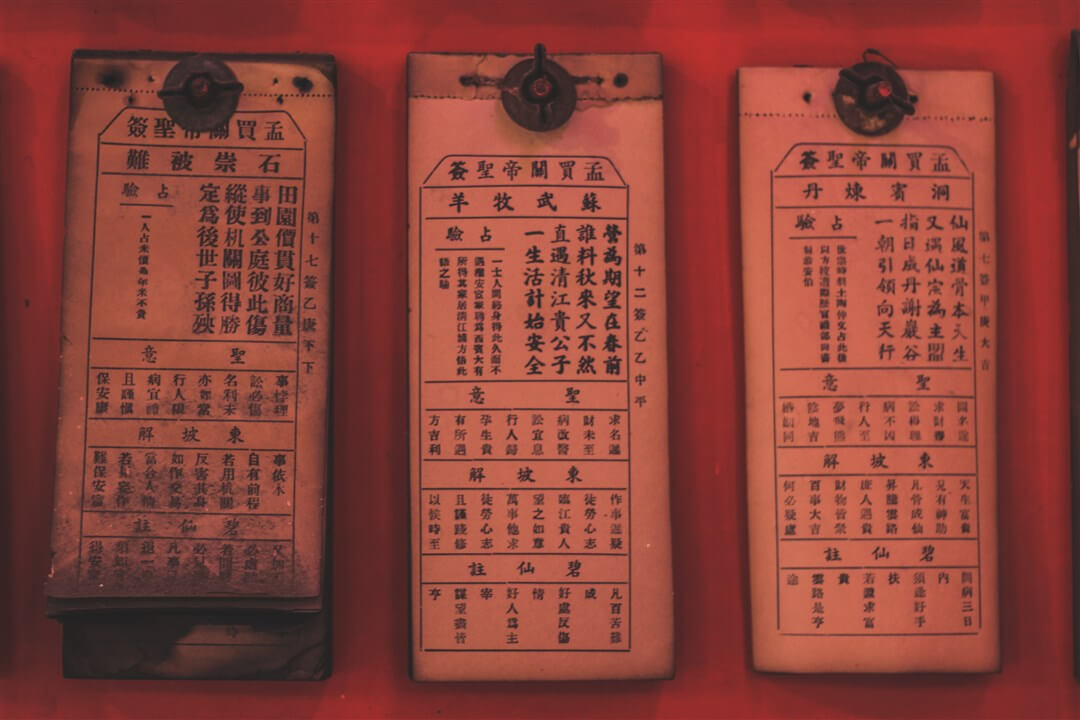 Closeups of some sheets inscribed with Chinese inscriptions. 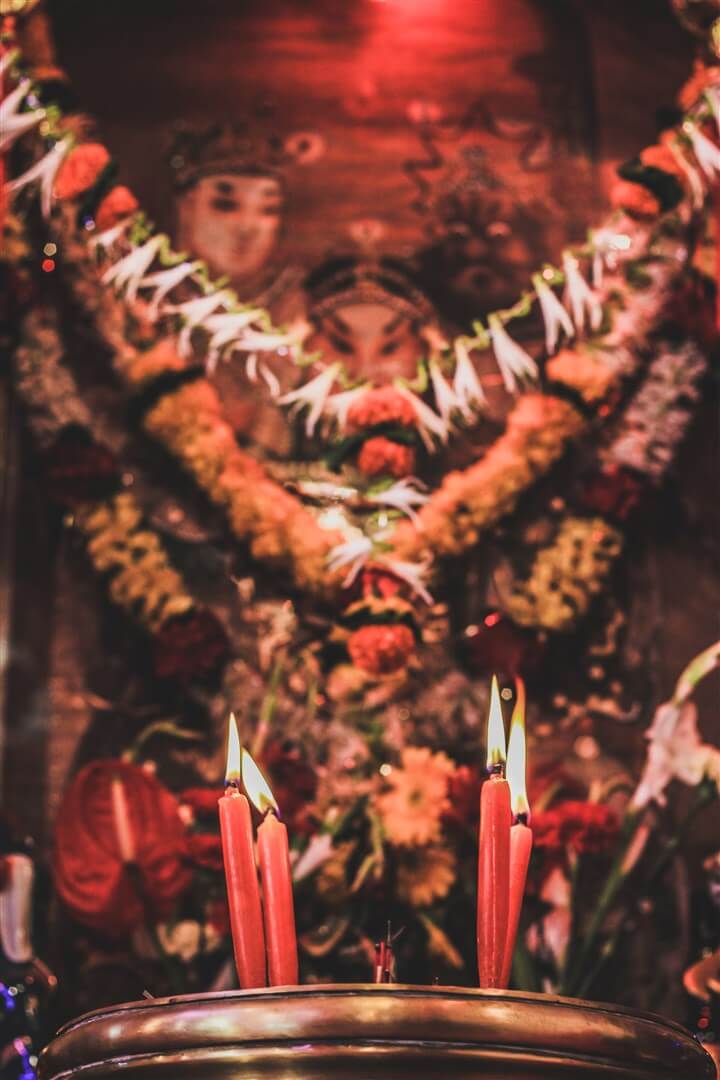 Candles lit up in front of a picture of the deity.

As soon as I entered the temple, a calm & peaceful feeling engulfed me. The whole room is painted in red and the sunlight entering through the window felt magical. I spent close to two hours clicking pictures and marveling at how neatly maintained the place was. The shrine wasn’t cluttered. It had the bare minimum necessities needed to decorate the lord they worship.

There weren’t many people around, so I couldn’t really talk to someone and get an insight about the rituals which are of significance to the Chinese. As I got out of the building which housed the temple, I tried to search for the caretaker of the shrine. Since it was a quiet place, I was a bit scared to knock on someones house. I wandered around the locality and finally mustered the courage to talk to someone.

Just opposite to the shrine, on the first floor lives an old gentleman named Liao. He and his family welcomed me in his house. I was offered cold drink at first, and some Chinese delicacies prepared in time for the New Year. After telling Liao about me, I started asking him about how he came to India and eventually settled here. 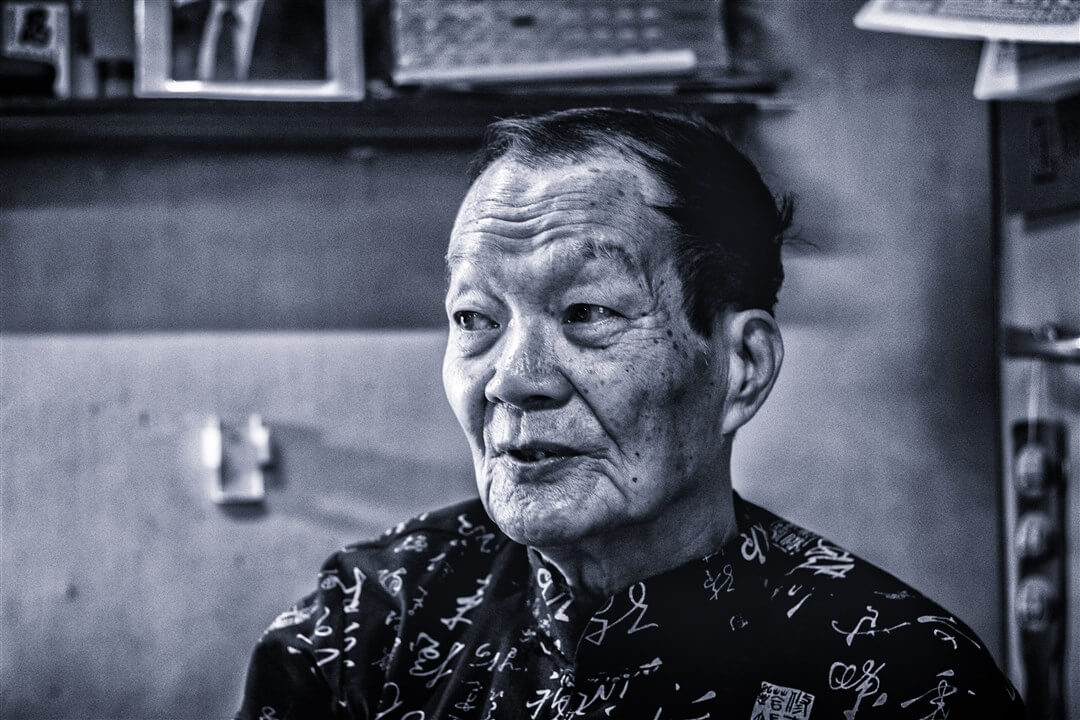 Liao, dressed in a traditional Chinese jacket for the New Year celebrations.

As soon as I asked him to describe how he came here, he began telling me each and everything, taking small pauses at the end of each sentence he uttered, just to make sure that he didn’t miss out on anything. And if at all he did forget a detail or two, he’d repeat the whole thing and the missed out part just so that I don’t end up getting some wrong info. His speech had a distinct accent, and it wasn’t pure Chinese. “Mera accent English, Hindi, Marathi aur Chinese ka mix hai” he said jovially. He started with how his family came to Kolkata and then to Mumbai. And how he has a brother living in a town in China.

“I went to a place near Shanghai in 1993. I told my friend who came to receive me to the airport that India is much better than China. The roads, infrastructure and life, much better. Then I had a chance to visit China again in 2004, almost 10 years later. And I was a astonished to see the development they had made.” The man had traveled and worked in UK when he was young. And he could go on and on with his life’s story. Just then, he stopped. He reached out to a shelf and got some tea leaves. He then poured some hot water in a cup and mixed those leaves in the hot water and offered me to drink it. “It is an authentic Chinese tea”, he said while sipping some tea from his cup. The tea was refreshing and I almost felt as if it had energized me to sit & listen to this gentleman for a while more. 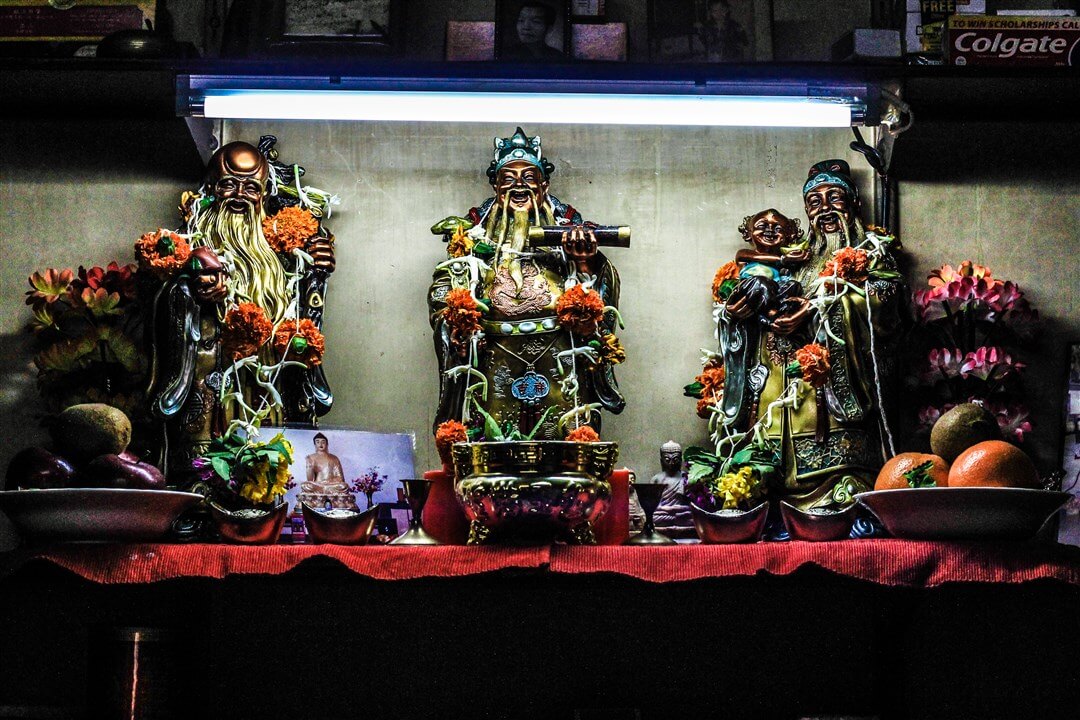 The wall adjacent to where Liao was seated housed a variety of articles. Like the tea leaves, some cosmetics, pictures of him and his family and the Three Stars.

As he was speaking, I was clicking pictures of things I found interesting in his house while still listening to him. He saw me take a picture of the three idols (picture above) and said “These are the Three Stars- Fu, Lu and Shou”. “They are the three legendary gods/stars of blessings, prosperity and longevity” he explained. While coming down from the temple, I had seen three letters in Chinese and wondered if they meant the same, “Yes! The temple too has these letters near the stairs”.

After a while, I asked him about the temple. “General Kwan Tai Kwon was a mighty warrior. He was a righteous and a just man who was known for his fair guidance. And it was for his counsel that a group of Cantonese Hong Kong sailors who worked for the East India Company set up his shrine in 1919″ he said. That explained to me that the shrine is dedicated to Kwan Tai Kwon and that there are many ethnic groups in China. Cantonese wasn’t a familiar word, for I was guy who had only read about the Han Dynasty and eaten Hakka noodles every time I went to a Chinese restaurant. 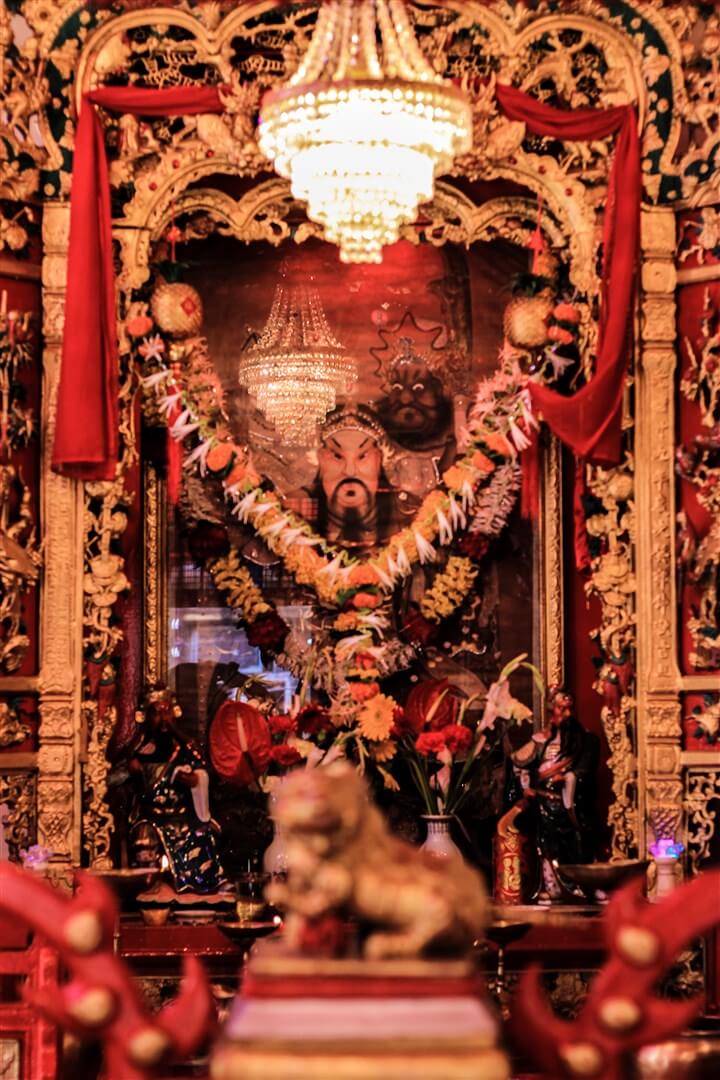 Windchimes have been an eternal part of the Chinese history. They are considered a fundamental part of Feng Shui. These were used to cure negative energy and send it on its way. The Chinese wind chimes were predominantly made of seashells or stones. The Chinese started using iron to make wind chimes after they learnt how to forge the iron. 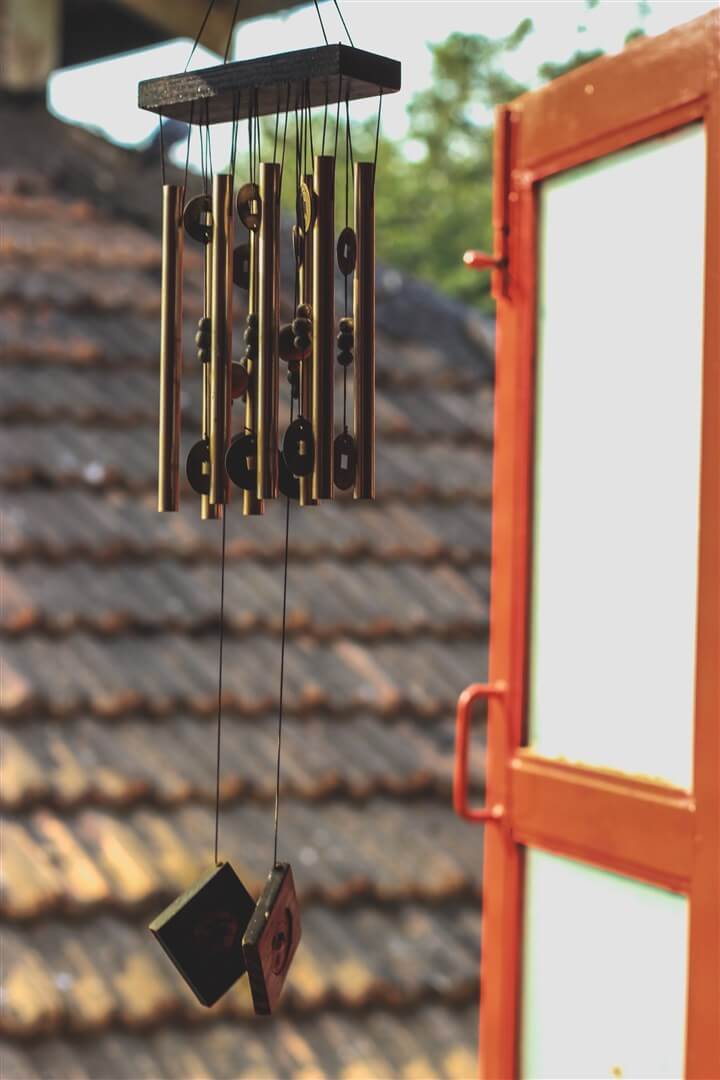 Wind chimes hung on the window frame at the temple.

And then I asked him why the whole shrine was bathed in a color of red. To which he replied “Red is considered auspicious in the Chinese culture. It brings fortune and joy.” That explained it all. 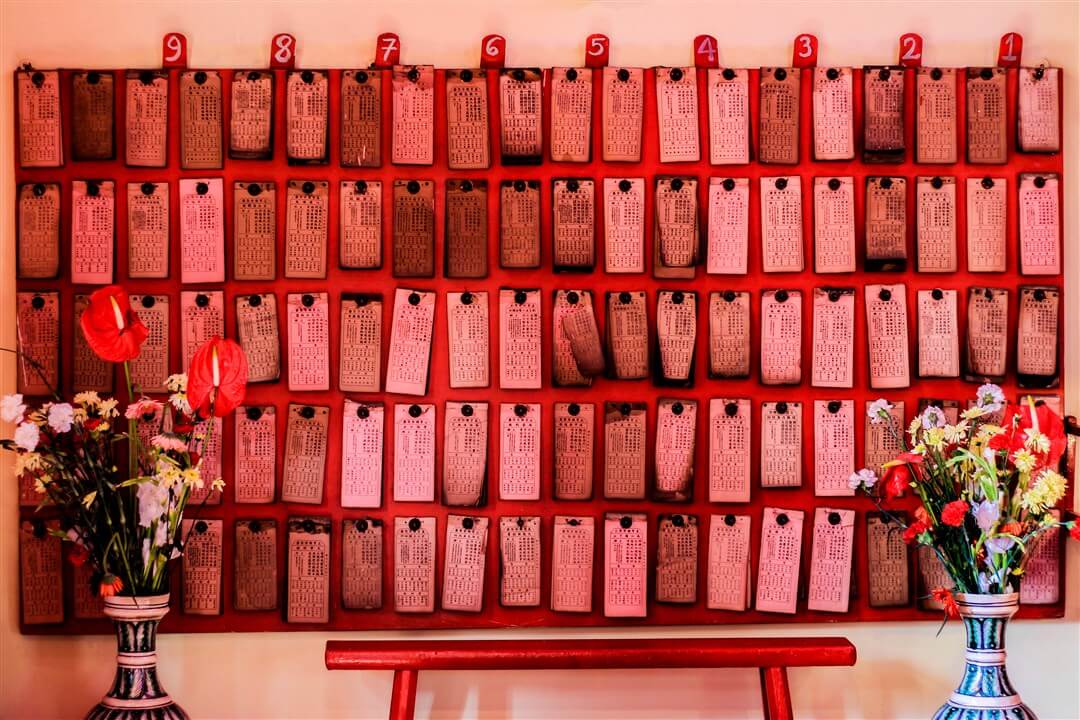 The wall with bamboo scripts.

“There is a wall next to the shrine, lined with bamboo sheets” he continued “they tell the fortune.”

Although he has many pictures and idols of the god he worships, Liao’s house also is a home to Sai Baba and Lord Ganesha. 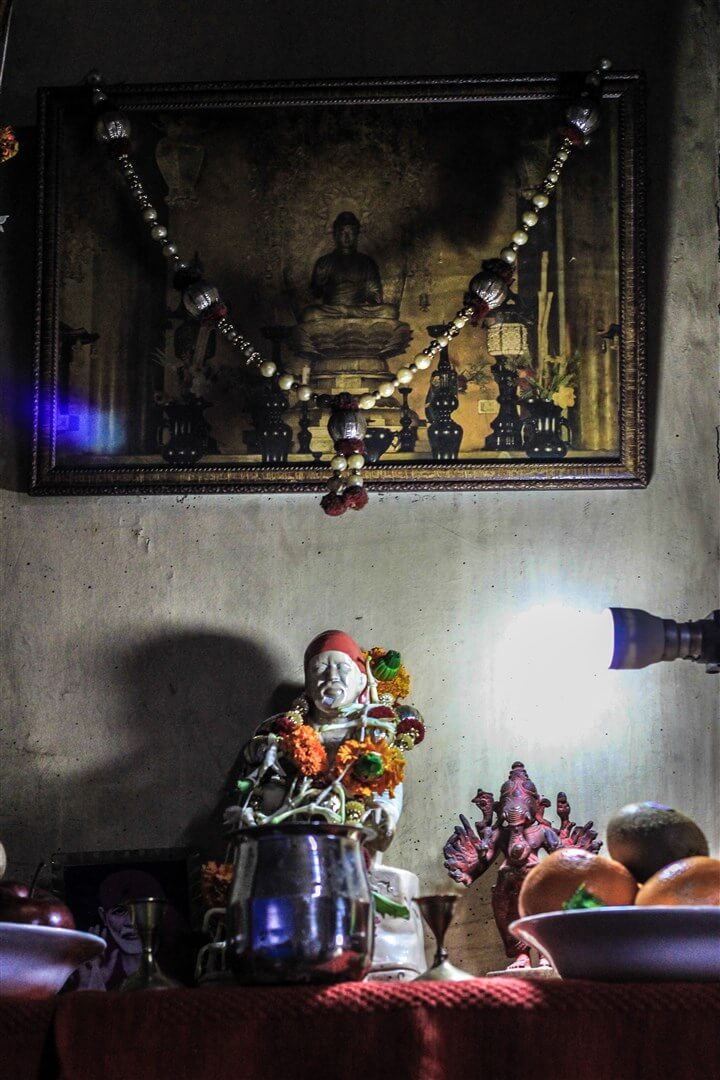 A small temple for Sai Baba and Lord Ganesha.

As was with his accent, his expressions too were distinct. Every time he had a mysterious story to tell, he’d raise his eyebrows and his voice deepened. He chuckled often at the end of some sentences and he reminded me of a grandfather telling stories to his grandson.

“There are some people staying here who are Chinese, but they haven’t got married to a Chinese bride or groom now. Even my daughter in law is Hindu. Back in the old days, it was different. Also, Mumbai doesn’t have a school which teaches Chinese and hence, our culture is getting affected a bit. My grandson studies in English. But, Kolkata has a bigger Chinatown than in Mumbai, and they have a Chinese school too! There students are taught our language.” 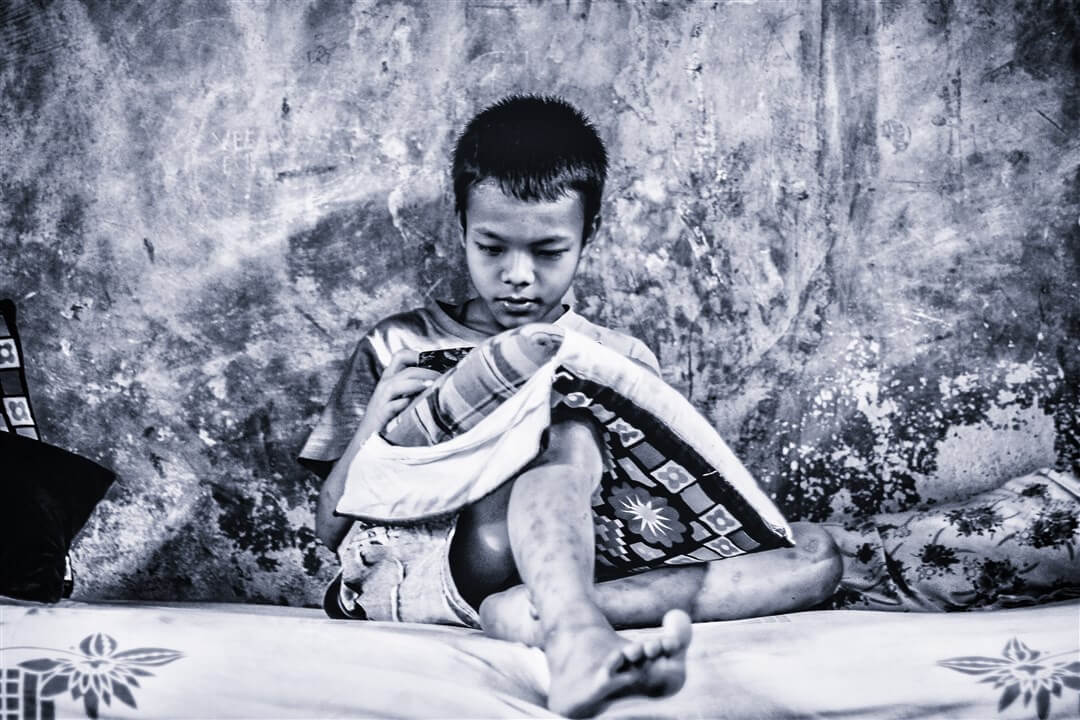 I clicked a final portrait of Liao and thanked him for the hospitality he and his family showed towards me. He offered me some dry fruits and bid me good bye. I was out on the street and I looked up at the temple above and decided to go visit it for the last time. There was nobody to be seen when I went back. Liao’s words reverberated in my mind. Now that I was back in the shrine, things started making sense to me. The significance of color red, the bamboo scriptures and the lord himself. I just sat there for sometime, reflecting back on the past four hours of my life. 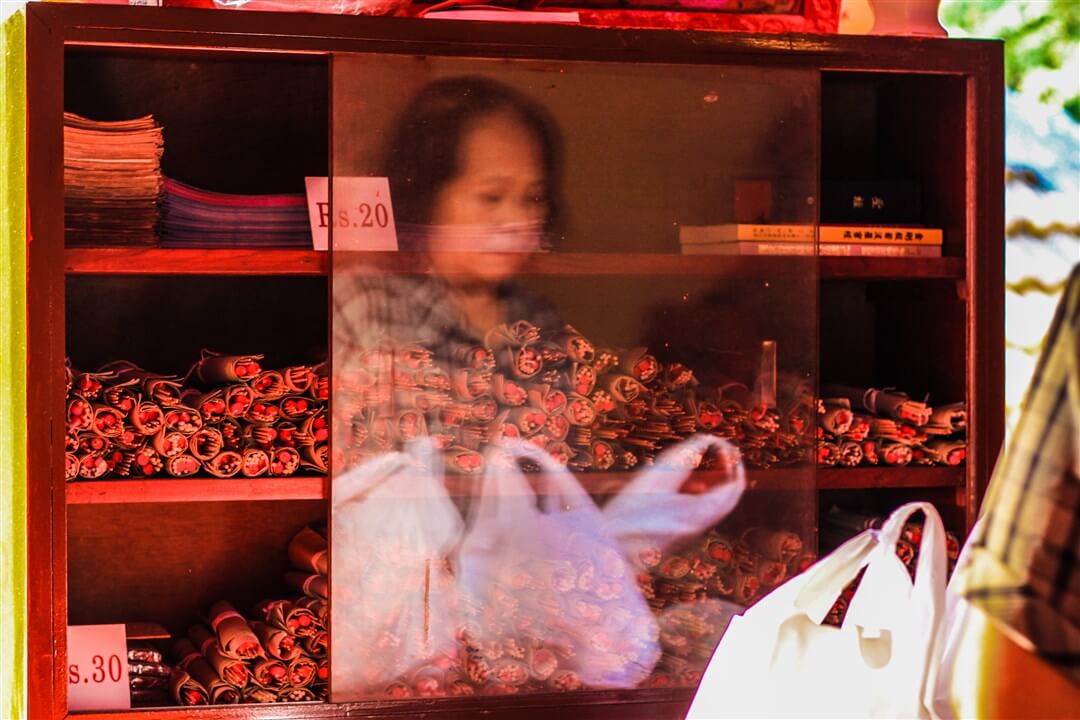 The caretaker came in after I visited the temple for the second time. She refused to let me take a picture of her at first, but smiled later when I showed her this picture. Also, this is how the essentials were stacked up in the wooden showcase. 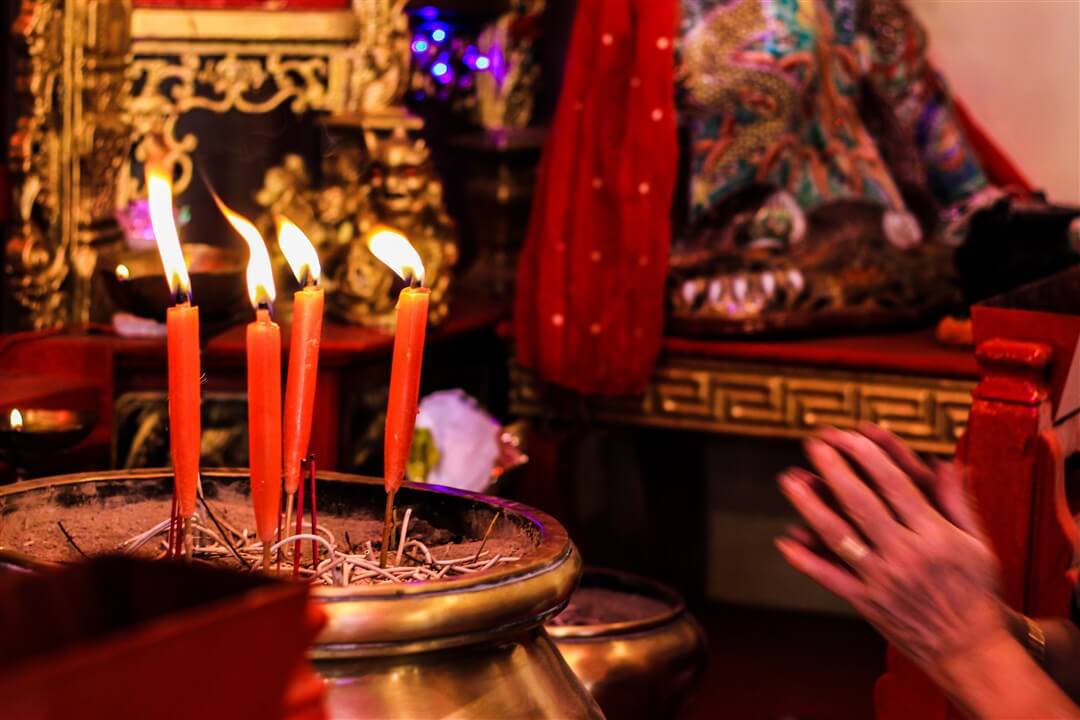 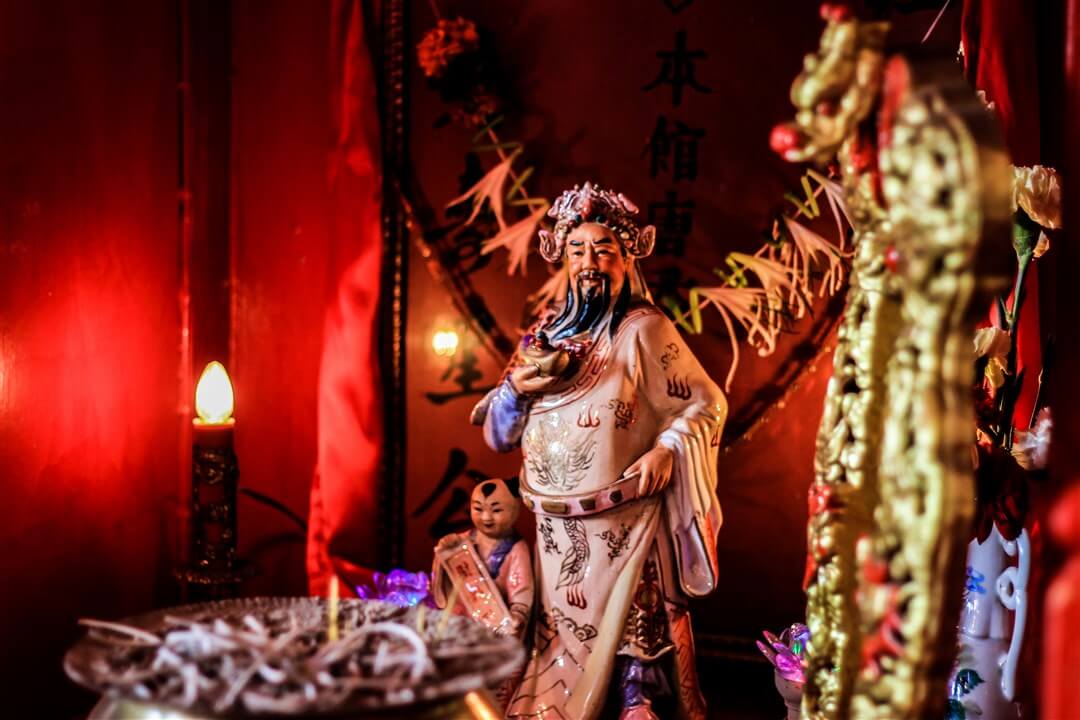 Chinese idols in the temple.

It was a delightful experience for me. I was happy to visit the temple and to know about the culture from Liao. As I headed back home, the sun set and the local Chinese population thronged to the shrine to seek blessings of Kwan Tai Kwon and celebrate the New Year with their loved ones. Lanterns and firecrackers are lit and celebrations go on till the wee hours of the night. For once in my life I can testify that Mumbai is truly a melting pot of diverse cultures.