Last morning was pretty unusual for me. I was torn between assignment submissions and a test and was feeling pretty dead bang in the morning. The weather was unusually foggy for this time of the year and as the day advanced towards noon, it rained heavily.

While I was writing the assignment, I glanced at the wall clock which read 7:25 am. It was still dark outside, with no sight of the sun in the sky. I got up from my chair and went towards the window and saw thick clouds surrounding the sun. I generally avoid looking directly towards the sun when it is a bit too harsh in the morning, but today, I could just look at it as if it were a full moon in the night sky. Quickly grabbed my camera and clicked a series of pictures, all of them but the one below marred by the presence of the clouds.

Sunspots are temporary phenomena on the photosphere of the Sun that appear visibly as dark spots compared to surrounding regions. They are caused by intense magnetic activity, which inhibits convection by an effect comparable to the eddy current brake, forming areas of reduced surface temperature. They usually appear as pairs, with each sunspot having the opposite magnetic pole to the other. Although they are at temperatures of roughly 3000–4500 K (2700–4200 °C), the contrast with the surrounding material at about 5,780 K (5,500 °C)leaves them clearly visible as dark spots, as the luminous intensity of a heated black body (closely approximated by the photosphere) is a function of temperature to the fourth power. If the sunspot were isolated from the surrounding photosphere it would be brighter than the Moon. Sunspots expand and contract as they move across the surface of the Sun and can be as small as 16 kilometers (10 mi) and as large as 160,000 kilometers (100,000 mi) in diameter, making the larger ones visible from Earth without the aid of a telescope.[5] They may also travel at relative speeds (“proper motions”) of a few hundred meters per second when they first emerge onto the solar photosphere. Manifesting intense magnetic activity, sunspots host secondary phenomena such as coronal loops (prominences) and reconnection events. Most solar flares and coronal mass ejections originate in magnetically active regions around visible sunspot groupings. Similar phenomena indirectly observed onstars are commonly called starspots and both light and dark spots have been measured.~ Wikipedia 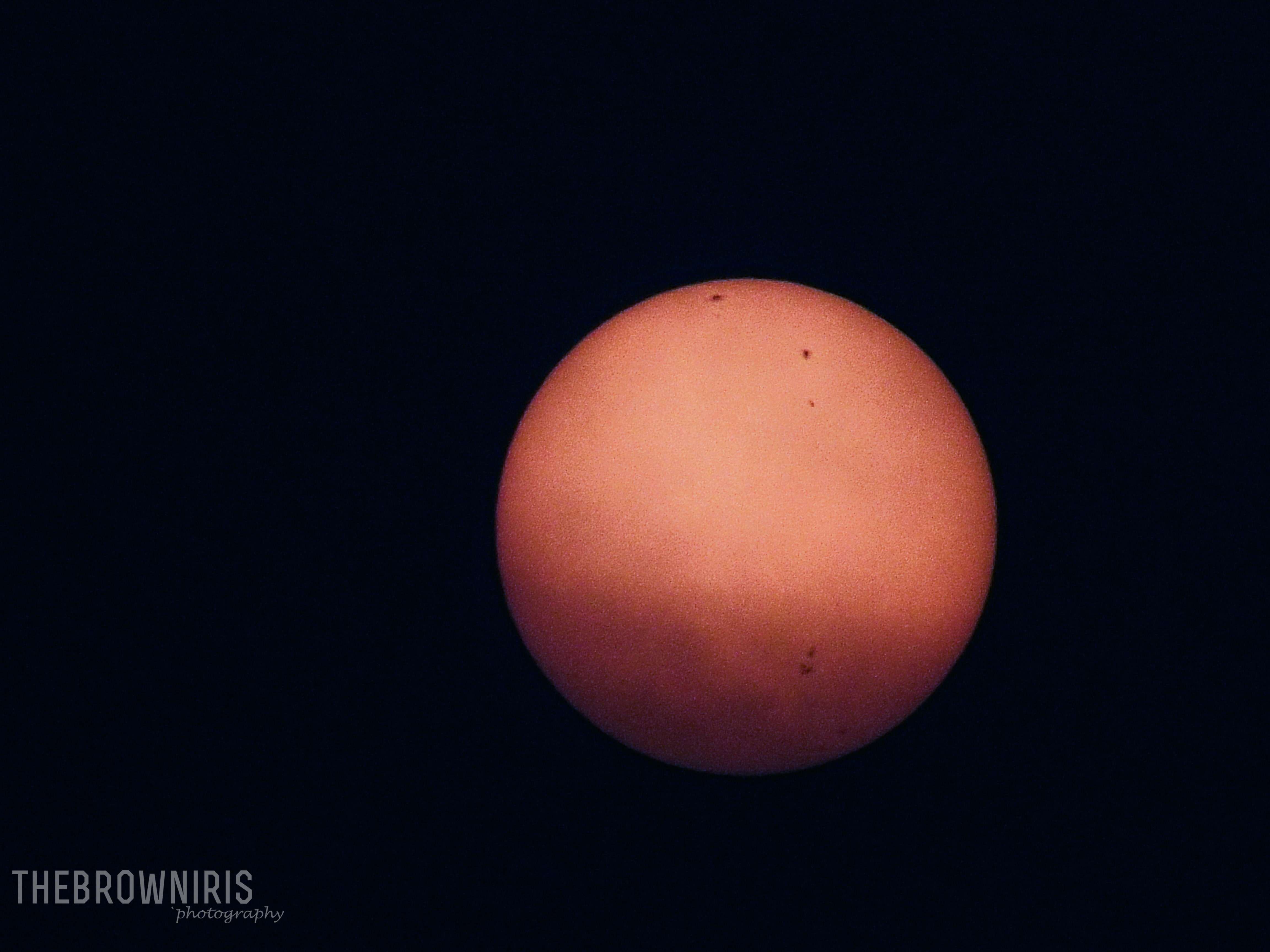 I wish I had a larger sensor DSLR and those telephoto lenses came cheap, but I am happy with the image my point & shoot managed to make. Have a nice day.

P.S. My camera comes with an EVF (Electronic Viewfinder) as opposed to the OVF (Optical Viewfinder) on high end cameras and DSLR’s. Do not use the OVF to compose the shot. Use your camera’s LCD screen instead.